The Karaite Jews of America

SYNOPSIS:
Parashat Wayyigash contains four sidrot. The first sidra՚ is in fact the concluding section of the last sidra՚ of the previous parasha, which is followed by three complete sidrot. The first sidra՚ covers, Jacob's last wishes; the second, Jacob adopts Manasseh and Ephraim and blesses them; the third, Jacob's blesses his sons; and the fourth, Benjamin's blessing, Jacob's death and funeral, and from the death of Jacob to the death of Joseph.

First Sidra՚ (Gen. 47:28-47:31): Jacob's last wishes
The parasha opens with the words, "And Jacob lived in the land of Egypt, seventeen years; and the days of the years of Jacob's life were, seven years, and forty and a hundred years" (Gen. 47:28) Just as Joseph had been with Jacob for the first seventeen years of his life, so Jacob - who was now finally with Joseph - was with Joseph for the last seventeen years of his life. Israel is now approaching his last days of life on earth, so his calls for Joseph. He asks Joseph to swear that he will not bury him in Egypt, but at the family burial site - the Cave of Makhpelah; Joseph swears.

Second Sidra՚ (Gen. 48:1-22): Jacob adopts Manasseh and Ephraim and blesses them
After the above events have taken place, Joseph is informed that his father is sick. So he takes his two sons, Manasseh and Ephraim, and goes to Jacob. When Joseph enters his father's room Israel sits up in his bed and relates to Joseph how God had blessed Jacob in Luz, in the land of Canaan, and had told him that He will make him many and give the land of Canaan to his descendants as an ever lasting possession. Israel tells Joseph that Ephraim and Manasseh will no longer be regarded as being Joseph's children, but will now be counted as being Israel's just like Reuben and Simeon. Israel declares, "But your offspring whom you will beget after them they shall be yours; by their brothers' name they shall be called in their inheritance" (Gen. 48:6). Israel asks Joseph to bring his sons closer so that he can bless them. Israel kisses them and hugs them. The Torah informs us that Israel was not able to see because of his age. Joseph takes his sons, Ephraim with his right-hand to Israel's left, and Manasseh with his left-hand to Israel's right; Israel, however, crosses his arms and places his right-hand on Ephraim's head - even though he is the younger - and his left-hand on Manasseh's head - who is the firstborn. Israel blesses Ephraim and Manasseh, but Joseph notices that his father has placed his right hand on Ephraim's head, and does not like this, so he takes hold of his father's hand and takes it off Ephraim's head and places it on Manasseh's head. Joseph tells his father that he had placed his right-hand on the wrong sons head. All the same, Israel refuses and says to Joseph, "I know my son I know, he also shall be a people and he also shall be great; but his younger brother shall be greater than he, and his seed shall become a full-measure of nations" (Gen. 48:19). Israel tells Joseph that he is dying, and that God will be with them and He will return them to the land of their fathers. Israel bestows to Joseph as an inheritance above his brothers the city of Shekhem, which the brothers conquered from the Amorites. (This is because Joseph is the first born of his favourite wife - Rachel - and the firstborn receives a double share of landed inheritance.)

Third Sidra՚ (Gen. 49:1-26): Jacob's blesses his sons
Jacob calls his sons and says to them, "Gather round and I will tell you, what will befall you in the last days" (Gen. 49:1). This section is usually referred to as 'Jacob's blessing', but in truth - as the epithet states - these passages are in fact prophetic words relating to the destiny and character of each of the Tribes of Israel that will hail from Jacob's sons. Below is a table comparing the birth order of Jacob's sons with the order they fall in the blessings: 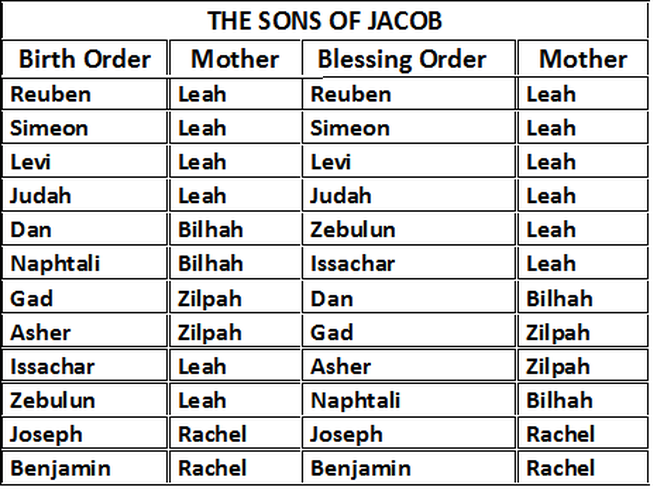 Reuben being the first born receives his 'blessing' first. Reuben is told that being the firstborn the double-share and leadership should be rightfully his, but because he committed adultery with Bilhah he has forfeited his right. Simeon and Levi are told that because of their fierce anger (the massacre at Shekhem) they will be scattered in Israel. The tribe of Simeon was absorbed into Judah, while Levi - being the priestly tribe - did not have a tribal territory but instead had cities and villages amongst the other tribes. The leadership is given to Judah - which he earned through the Joseph saga - who is compared to a lion. Judah is informed that the sceptre and leadership shall not depart from him. This is in reference to the House of David from whom the Messiah will come. Zebulun is told that his territory shall be on the coast with Sidon in Lebanon as his border; this has yet to happen. The other sons are all given blessings that are peculiar to them. Joseph is compared to a fruitful bough and it would seem from his blessing that he receives the blessings of abundance that should have gone to Reuben the firstborn. The blessing of the firstborn, which has been taken away from Reuben - Leah's firstborn - is divided between Judah (leadership) and Joseph (abundance and double-share) Jacob's firstborn from Rachel.

Fourth Sidra՚ (Gen. 49:27-50:26): Benjamin's blessing, Jacob's death and funeral, and from the death of Jacob to the death of Joseph

Benjamin has to wait to the next sidra՚ to receive his blessing, where he is compared to a wolf. Once Jacob has finished blessing his sons he tells them that he is close to death and commands them to bury him in the Cave of Makhpelah where Abraham and Sarah, Isaac and Rebekah, and Leah are buried. The Torah then says, "When Jacob had made an end of commanding his sons, he gathered up his feet onto the bed; and expired and was gathered to his people" (Gen. 49:33). Joseph flings himself on his father's face and weeps over him and kisses him, and commands his servants the physicians to embalm his father. The embalmers bestow upon Jacob a full embalming which lasts forty days, and the Egyptians wept for him for seventy days. Once the days of weeping for Jacob had passed Joseph asks members of Pharaoh's household to speak to Pharaoh on his behalf, in order that Pharaoh should grant Joseph permission to go up to the land of Canaan and bury his father - Pharaoh grants his permission. The funeral procession to the Cave of Makhpelah consisted of Joseph's household, his brothers and his father's household, as well as Pharaoh's servants, the elders of Pharaoh's household and all the elders of the land of Egypt, along with chariots and horsemen. Once the procession reached Goren Ha՚aṭad [גֹּרֶן הָאָטָד - The Threshing Floor of Bramble] which is on the east side of the Jordan, they camped and mourned for Israel for seven days. Jacob's funeral procession did not come to Hebron - where the Cave of Makhpelah is situated - by the quick route i.e. from the south, but skirted the southern border of the land of Canaan and then moved north via the 'King's Highway' on the eastern shore of the Dead Sea and approached from the east crossing the Jordan. It is interesting to note that Jacob's funeral procession entered the land of Canaan from the same direction that Jacob had entered after his return from living with Laban. It is also from this direction that the Children of Israel entered the land of Canaan under the leadership of Joshua forty years after the Exodus. The funeral procession reaches the Cave of Makhpelah and their Jacob - also known as Israel - is buried. After their father's death the brothers are worried that Joseph might still bear a grudge against them for the ill they caused him and might want to repay them. The brothers are frightened and attempt to placate any anger that Joseph might still hold against them, so they tell Joseph that before their father died he commanded them, on his behalf, to supplicate Joseph and ask that he forgive his brothers for their sin and ill they caused him. While the brothers are relating these words Joseph weeps, and the brothers fall before him and tell him that they are his servants, Joseph, however, says to them, "Do not fear; for am I in place of God. And you, you thought ill against me; God thought of it for good, in order to do this very day to keep many people alive. And now do not fear, I will sustain you and your little-ones" (Gen. 50:19-21). The last few verses of the parasha tell us how Joseph lived to see his great-great-grandchildren and that before he died he told the Children of Israel that God will visit them and bring them out of the land of Egypt to the land that He swore about to Abraham, Isaac, and Jacob. Joseph makes them swear that when God visits them they are to take his bones with them. The last sentence of Sefer Bereshit says, "And Joseph died, a hundred and ten years old; and they embalmed him, and they placed him in a coffin in Egypt" (Gen. 50:26).

THE AUTHOR'S THOUGHTS:
The final parasha of Sefer Bereshit brings to a conclusion the Age of the Patriarchs. As the Age of the Patriarchs sets upon the world, the horizon is made clear for the Age of Bondage and Servitude that will eventually take its grip on the Children of Israel. The end of the Age of the Patriarchs does not therefore herald the fulfillment of YHWH's promise to Abraham that his descendants will become as numerous as the stars in the heaven and inherit the land of Canaan. This epoch of human history belongs to a later period. The Patriarchs did not lament the fact that YHWH's promise had not been brought to fruition in their lifetimes. They understood that a nation needs to grow and that growth comes about through experiencing life and overcoming its many obstacles; a process dependent upon time. The Patriarchs comprehended that they were the foundation stone and thus did not demand the instant gratification of seeing YHWH's promise fulfilled in their lifetimes, only a guarantee that one day His word would be fulfilled. The concepts that every generation is built upon the deeds of its predecessors and that fulfillment is the product of something sown today but reaped by our descendants had been internalized by the Patriarchs. Sefer Bereshit ends on a note of assurance from Joseph that YHWH will fulfill His promise and that it is just a matter of time. If we should hold onto but one lesson taken from the life of the Patriarchs then let it be this; "that we should not lead our lives as if we are the first and only generation, living for instant gratification; but that there is a distant tomorrow and that which we set in order today we do so for our children and our children's children". Our worth will not be measured in ages to come by whether or not we fulfilled our personal ambitions, but by the type of legacy that we bequeath to our descendants.